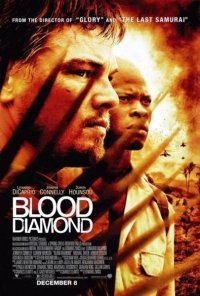 Danny loves diamonds just like women did but in a whole different perspective. If you ever wonder that each diamond cost at least one life, you will never favor diamonds for your wedding in the first place!

Anyhow, this story was indeed an eye opener for everyone especially the rich and famous as throughout the sequence in the movie, it portrays a firm impregnation of two different scenarios of life crossing over each other – one on the rich and one on the poor side of the world.

The show is very much diamond centric where the gem was mined in conflict zones where lives are lost and profits are used to fund factional wars. Interestingly this movie was set in Sierra Leone which was very much a similar tale told by my Lebanese-Sierra Leonean friend I had briefly.

It was during the Civil War in 1999 where the rebels known as RUF (Revolutionary United Front) are on the struggle to push government forces out of power by shrinking their support through atrocities such as hand chopping, ransacking, raping, looting and burning. 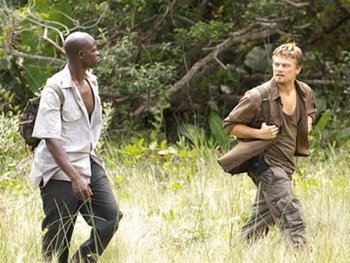 Fictional character, Solomon Vandy a fisherman with a skill of net-knitting was trapped in his village with his son when raiding rebels come to destroy their village. Solomon was taken prisoner despite nearly losing his hands when the rebel chief was confident of Solomon’s ability to work with them. He was then enslaved and transferred to a remote diamond field to work under the command of Captain Poison. 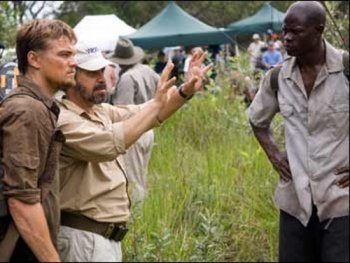 Solomon and colleagues have to endure appalling treatment from his captors working in the fields day by day. The scenario portrays how forced labours are executed directly if they were caught hiding the gems for their own interest. so did Solomon. On a fateful day he discovers a unique diamond with a rare colouring. Using some excuses to hide them, Solomon went to the bushes at the river banks to ease himself.

Moments before he hide them, his act was spotted by his superior. In split seconds, the situation became chaotic as government forces were launching an attack to cleanse the area from rebel control. Being panic himself, Solomon managed to escape death from Captain Poison and was then jointly arrested by the government forces. 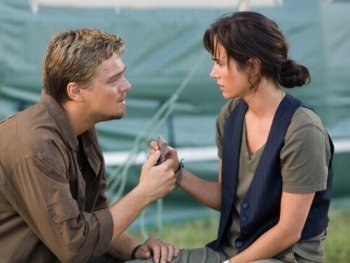 On a separate incident, the rebel launch a second wave of attack against the refugees of Solomon’s getaway villagers. Among the captured were Dia, Solomon’s own son, alongside his peers who were taken prisoner and was then brain-washed to be absorbed into the RUF as child soldiers. In the process, he was being nurtured with hate and trained to be a fearless fighter. 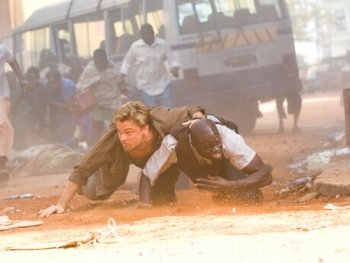 The story also evolves around Danny Archer a white mercenary who have lost his parents when he was little. With familiarisation of the political scenario in Africa, Danny was involved with illegal arms trade with the RUF in exchange for diamonds. During a diamond transit in Liberia supposedly for Colonel Coetzee (Danny’s former commander who was employed by Van De Kaap, a diamond merchant), he was arrested for smuggling and was locked up in the same cell with Solomon. 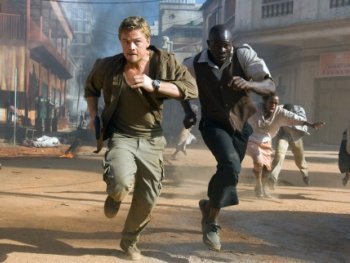 As the news spreads in the lockup, Danny learnt about Solomon’s hidden diamond. He arranges for Solomon’s release from prison and offers to help him find his family in exchange for the diamond. Danny then gets to know Maddy, an American journalist in a function who was covering the illegal diamond trade. The two became friends and jointly helping Solomon to find his family. 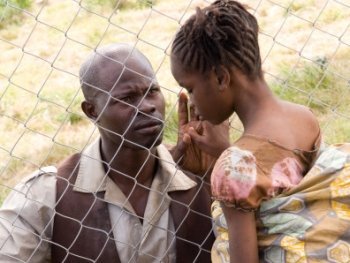 What supposed to be a happy ending became a perilous one as Solomon fails to find Dia with the rest of his members of family in a UN refugee camp in Guinea. Their journey continues when Solomon and Danny infiltrated the party of journalist and disguised themselves as journalists with the help of Maddy. The convoy brought journalists to troubled areas in RUF controlled territory only to find themselves ambushed as well. 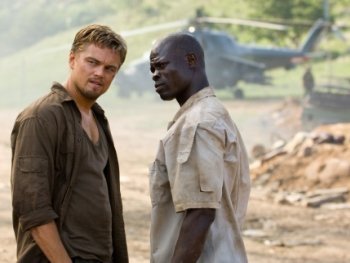 As an experienced survivalist, Danny managed to man their convoy vehicle and fled the scene with the rebels hot on their wheels. Their getaway ended in a deep remote area of the jungle. Coincidentally, their strand lead them to what supposed to be Solomon’s old work place where RUF once again regain control. In the camp, Solomon was painfully reunited with Dia but Dia refuse to acknowledge him almost got Solomon killed by the rebels. 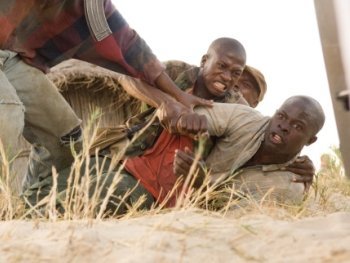 So they went to the place where Solomon hid the diamond, and with trickery, Danny with Solomon’s aid managed to kill the Colonel and his guards and managed to secure the diamond into safety. The diamond was then handed to Danny in return of favour.

During the drama, Danny was himself shot but kept it to himself without Solomon knowing. Dia who is still disturbed almost killed his own dad and Danny at gunpoint. With successful negotiation with Dia, Solomon manage to get his son back in the end and all three of them made a safe escape to the mountainous terrain as the Colonel’s men are launching a massive manhunt to hunt down the trio who were responsible of the Colonel’s death. 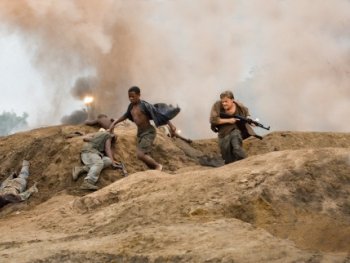 The injuries that Danny was suffering hampered his effort in running further. Knowing that death is near, Danny returned the diamond to Solomon and suggested that Solomon sell the diamond in London. Danny then made the last call to Maddy requesting assistance so that Solomon can be reunited with his family and at the same time luring the corrupt merchant into a deal meeting up at a rendezvous point where Maddy then make a good coverage out of that ending so to expose the trade of blood diamonds was in fact masterminded by known diamond merchants. 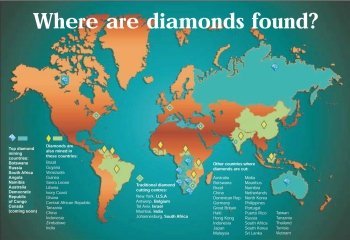 The ending shows Solomon clad in a smart suit addressing a conference on blood diamonds in South Africa where he was given an opportunity to story hisexperiences related to the blood diamonds. The conference was a real conference that led to the Kimberley Process Certification Scheme (KPCS) which seeks to certify the origin of diamonds in order to curb the trade in conflict diamonds.

i was so lucky to see him from near when he was turning his last film in Morcco Rabat. It was about one month ago.