From Permatang Pauh to Parliament

Next stop – Putrajaya. Make sure the crossovers will take place. You said the 16th. That was merely 3 weeks shy. I was hoping that it will happen. Anyway, good luck in serving us and we are hopeful that you could fulfill your promises just like what you have promised us in your series of ceramahs and PC’s, not only for the folks in Permatang Pauh (PP) but the entire rakyat of the nation.

Your warcry outrun (and outsmart) the BN machinery though they came with an army of cabinet strong. They have forgotten that the army of rakyat is way more effective. Though Khairy wanted to make a mourning day of Pakatan, his blatant arrogance backfired, and the episode had made BN the best ‘movie’ choreographers ever with their self-titled ‘movie’ “Three Swearings & A Funeral” (pun intended) taken place.

Many might recalled two swearings – Saiful’s and Mohd Najib’s. But one might overlook this, during the campaigning, ‘far far away’ in Perak, the long lost BN warlord of Perak called Tajol also played his role in trying to come clean swearing that he had no plot in framing the two Perak Pakatan exco’s for corruption thus making it all three. If you put all 3 names as abbreviations, Saful’s S, Mohd Najib’s M and Tajol’s T, it became S.M.T, and guess what’s shocking about it? S.M.T was itself a bad omen for BN as it also means ‘SUMPAH MAKAN TUAN’ literally means ‘Swearing Backfired’.

A record in making that PP was indeed the ‘freakin’ coolest by-election ever in Malaysia. Here are some trivias about PP by-election that I have observed recently; 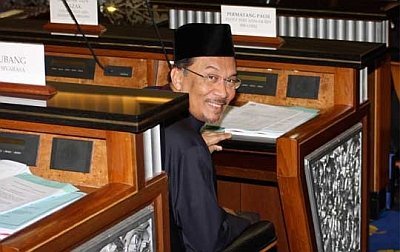 Clad in baju melayu for the swearing-in, he ain’t no de-facto anymore.

It’s a fresh new beginning for Malaysia. Can you feel the vibe that this year is going to be the most meaningful Merdeka day that Malaysia ever experienced?