Oh yes yes yes, my page Rank is 4 now! Glad it happen as I was hoping this is not going to be possible as my backlinks are still low. I thought another 2-3 months will only yield results but I really didn’t expect that this surprise came earlier than expected. I think the effort that I put in SEO-ing and SE submission that does the trick. 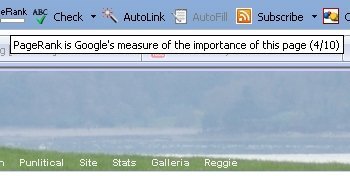 Just a quick note – PageRank was calculated based on an equation. All of its inbound links are taken into account for calculation. These are links from within the site and links from outside the site.

That’s the equation that calculates a page’s PageRank. It’s the original one that was published when PageRank was being developed, and it is probable that Google uses a variation of it but they aren’t telling us what it is. It doesn’t matter though, as this equation is good enough.