Making Sure Your Internet Marketing Campaign Is Not Spammy 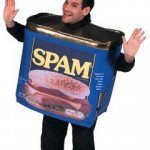 So you’ve been working hard on the internet marketing plan for your web strategy but have you stepped back to look at it from the user’s perspective? Are you a spammer? Online marketing is very community focused and it takes time to build a trusting relationship.

You need to seriously reflect on your internet marketing campaign to avoid losing that trust. Last Friday at a Lunch & Learn session my company co-sponsors, our speaker Brett Trout said “Reputation takes a long time to build and a second to diminish” in regards to business ethics. The same idea holds true with a community building and internet marketing strategy.

Here are two examples of mistakes I’ve made where I developed what I thought were value-added marketing campaigns – which turned out to be the opposite.

In an effort to increase email subscribers on GetANewBrowser.com I implemented a modal popup feature of aWeber. I thought this was a value-add feature that provided a call to action to some extra content I was giving out. Even though this subscriber drive was a resounding success – it frustrated users. So I turned it off. Conversions went way down, but my readers are much happier.

This means I sent you something like the following message “Hey thanks for following me have you checked out my Internet Business Podcast at ManagingTheEdge.com?” In one instance Aaron Houssian sent me a direct message follow up alerting me to my spammer behavior. At that point I realized my marketing campaign was indeed spamming people and they did not appreciate it. So, after much debate, I turned it off.

In both instances my community alerted me to the issue at hand and, thankfully, stuck with me after I addressed the issue transparently and followed through with their requests. This brings up another lesson – you need to listen to your community. Not only can you crowd source ideas from them they will give you immediate feedback if they feel you are spamming them.