Tengku Adnan Mansor (Tend-Cruel At-None Monster) is the latest entry in Malaysian bloggers P.E.N.O.L (Public Enemy Number One List). His claims saying that;“All bloggers are liars, they cheat people using all kinds of methods. From my understanding, out of 10,000 unemployed bloggers, 8,000 are women.” has just created an uproar thus disrupted once peaceful (again) Malaysian blogging scene.

And to show solidarity with our female blogger counterparts, this is my response to that ‘monster’.

He has no shame, he has no fame,
His arse deserve to get engulfed in flame,
He loathe, he diss and he defame,
Claiming bloggers are bunch of useless dame

He diss female bloggers non sequiturly
He is one hell of a stuck-up misogyny,
Bloggers wonder if he lose his sanity,
Or does he flout at anything beauty?

He commented blunt and loud,
He made publicities like a retarded stout,
Didn’t get praises not even an applaud,
He was jeered like an imbecilic lout.

He commandeered the tourism ministries,
Who control Malaysian tourism industries,
With his dimwit character and poor incapabilities,
Visit Malaysia of his is nothing like taking a piss

He made himself public enemy number one,
Although he thinks his commentaries are fun,
With moms, lengluis and professional women alike,
He is the type that every blogger loathe and dislike.

He said the bloggers in the net are liars,
Blunt claims from unknown fact suppliers,
He said 80% are unemployed or jobless,
Not knowing what he said was absolutely factless,

8,000 are women that’s what he claim,
Out of 10,000 unemployed does sound lame,
Has he no pride has he no shame?
He has just embarked on a journey to destroy his own name.

Bloggers unite in solidarity to fight,
We retaliate this fucktard who couldn’t write,
For us where words are poisonous darts,
We ensure our backfire penetrates his hearts.

Retreat we never, retreat we not,
We reiterate again from dot to the dot,
We malafide this motherf****** high-ranking bigot,
We make our blogging platform forever hot!

Say no to this fucktard! 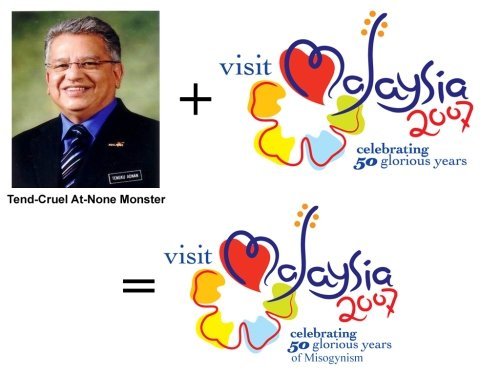